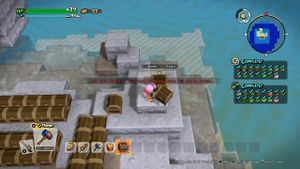 The player hits the limitation on general chests.

Due to how the game works, there are many limitations to how many items of a same kind can be placed per island in Dragon Quest Builders 2. Upon reaching any of them, the game will show the player a warning with red text.

For the game to register a room, the required items for the room type to register must be placed within 3 levels: the first two blocks upwards from the door's bottom, and the block below. Anything below or higher will not count towards the room type or score.

There is a 100 room limit per island. The player can build more, but only the first 100 rooms will be registered and identified. This means the player can still use them, but the npcs will not use them as intended.

Rooms also have two size limits: They cannot be wider nor longer than 32 blocks, and the maximum amount of blocks a room can have is 150. Anything beyond these requirements will not count as a room.

The following limitations are hard, meaning the game won't allow players to bypass them.

The player will be met with the following message when they try to place more items: "You can't place any more!".

The following limitations allow the player to place more items, with the caveat that they will not have the item's specific function and thus they can be placed as decorations.

The player will be met with the following message when they hit the limit: "Any more items of this type that you place will not be usable.".