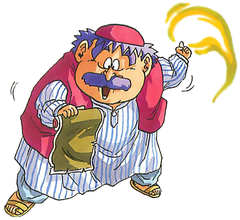 In the Dragon Quest franchise, characters and monsters have access to various magic spells and, in later installments, abilities for use in combat.

Magic spells have been around since the first Dragon Quest. They have many uses such as healing characters, damaging enemies, inflicting status effects, and teleporting. Unlike skills, all spells require MP to use. Generally, the better a spell is the more MP it will cost; some even require all remaining MP to cast.

Introduced in Dragon Quest VI, skills added a new dynamic to combat (especially for melee characters). Skills cover a wide range of actions, with some focusing on deft weapon use, agile footwork, or making the body as hard as steel. Several skills can also be used in the field or in dungeons, providing reconnaissance or stealthily avoiding enemies.

Introduced in Dragon Quest VIII, traits are passive bonuses obtained after allocating skill points. Most of these just offer flat bonuses to attributes, but some feature unusual benefits such as increased evasion or reduction in MP costs.