Warubou is a small, pink and purple furry monster with long arms and short, stubby legs. He is usually shown having long ears with an antenna protruding from the top of his head.

In Dragon Quest Monsters, Warubou acts as an antagonist for the game, being the one to kidnap Milly from her brother Terry at the start of the game. After the kidnapping, Watabou, a creature of a similar species to Warubou's, brings Terry to the land of GreatTree, where Warubou had taken Milly. There, Terry becomes the Monster Master of GreatTree and saves his sister. Warubou's intentions for kidnapping Milly presumably is to bring a potential Monster Master to GreatLog and win the Starry Night Tournament (although this isn't made clear until Milly's appearance at the tournament).

Warubou occasionally makes appearances at the boss rooms of certain Traveler's Gates, as well as within the Kingdom of GreatTree. In the monster stables, Warubou will trick Terry into eating BadMeat. In the bazaar, a woman will make a remark on Warubou's name being funny, prompting him to push the woman off a ledge (although she will appear back where she was later, seemingly unharmed). In the Room of Talisman, Warubou will attempt to enter the village Golem is guarding, prompting the latter to send him flying away. In the Wells Gate, Warubou will attempt to transverse the area before taking a wrong step and falling into a pitfall. In the first Arena Gate, Warubou will ambush Terry and drop one of his monsters into the lake. In the Room of Reflection, Warubou will carry future Terry away after the conclusion of the battle with Dhuran. Finally, after Terry wins the Starry Night Tournament, Warubou will appear and carry Milly off. 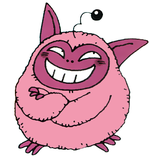 In this game, Warubou acts less evil than in the previous installment and more prone to just being mischievous. After Cobi and Tara get a Nut Pie for their mother, Warubou and Prince Kameha, his partner in trouble-making, steal it from them and hide deep inside GreatLog. When Cobi and Tara go to get back, they find Warubou and the Prince in an argument over who should claim their prize. In the ensuing struggle, GreatLog's navel is dislodged. At this, the Prince flees, but Warubou jumps in to help stop the navel from letting in water, which would eventually sink the entire island. He asks Cobi and Tara to find a Monster Master to help them, but when nobody takes them seriously, they are forced to go themselves and find a plug for the navel. Once they do, Warubou is freed from stopping up the whole and is able to continue living his life.