Balzack is a character in Dragon Quest IV: Chapters of the Chosen. A student of Maya and Meena's father, the alchemist Mahabala, Balzack killed his teacher for the Secret of Evolution he had discovered, being an underling of Psaro.

Balzack possesses several qualities of a typical villain: arrogant, dishonest, immoral, and murderous. These traits are shown by his ruthless betrayal and murder of Mahabala. It becomes evident throughout the game that Balzack is loyal to no one but himself. After supposedly achieving the pinnacle of the Secret of Evolution, Balzack indicates that he plans on usurping Psaro the Manslayer, just as he did to his previous master. Even his fellow demons dislike him. Marquis de Léon took the chance to separate himself from Balzack when the opportunity presented itself. Balzack's minions expressed no sadness upon his death. Even Psaro, who normally does not display cruelness towards his allies and underlings, does so for Balzack. He impresses punishment of death upon him for failures (according to Marquis de Léon's dialogue after his initial defeat), something he normally does not do, and uses him as a test subject for an experiment expected to fail.

While he appears to be a pallet-swap of the Night clubbers and Pruslas in his "Baalzack" form, the Monsters games show that he is larger than the former while smaller than the latter, taking up two spaces.

The entirety of Chapter 4 is centered on the sisters' quest to confront Balzack, their father's murderer, whom they finally encounter at Palais de Léon. However due to the intervention of the Marquis de Léon, the sisters are defeated, thrown in jail, and ultimately forced to flee to Endor.

Balzack uses powerful magical and breath attacks, and if he is injured he will heal himself fully with Fullheal, however, he is vulnerable to the effects of the Sphere of Silence.

In the fifth chapter, the Secret of Evolution has transformed him into a more powerful being: Baalzack (or "Balzack+"). He has been evicted from Palais de Léon, likely due to his failure back in the fourth chapter, and now occupies the empty Castle Zamoksva. He has become astoundingly arrogant, and is disliked even by his subordinate demons. His intention, he says, is to enhance his body to be even more godlike than Psaro the Manslayer, but he lacks the Armlet of Transmutation which allows him to use the full power of the Secret of Evolution. With the help of the hero, Maya and Meena are able to finally defeat him. 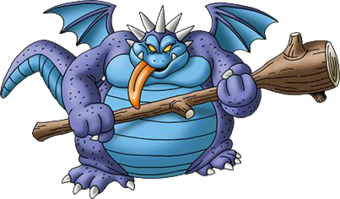 Though it uses his original name, the monster appears in Baalzack form.