"I am consulting the cards...and they are saying we will have girl problems... In a castle filled with women, this is a little worrying."

Maya Mahabala is her older sister, though characters frequently mistake Meena to be the older sibling due to her relative maturity and seriousness. She is a fortune teller and a priestess on a quest to avenge her father with her sister. She becomes the first of the Hero's companions after reading their fortune and realizes it is her destiny to help them defeat the Evil One.

Meena is nearly the spitting image of Maya, her older sister. She dresses much more conservatively compared to her sister, though they wear identical headpieces. Meena carries a crystal ball with her everywhere, which she uses to tell fortunes. While she and her sister both have long purple hair, Meena does not have bangs/fringe.

Meena is an extremely reserved and quiet person, and very rational. This disposition leads her to often scold her sister for her poor judgement regarding their money, and her general laid-back demeanor. But, despite these stern traits, she is still a very kind person at heart, looking out for her sister when the two set out to avenge their father's murder, and charging only a minuscule amount of gold for her fortune-telling services. During her travels with the rest of the Chosen Ones, Meena will occasionally have cryptic visions of the near future.

Chapter 4 begins with Maya and Meena performing at the town, Laissez Fayre, which is populated almost entirely by entertainers and tourists. They use their job as a cover and the town as a base to investigate the murder of their father, a prominent alchemist. Though they suspect his apprentice, Balzack, killed him in order to steal the Secret of Evolution, they have nothing to back up their claims, and keep them to themselves for the time being.

After following the trail through several towns across the entire country, they finally confronted the murderer at his castle. Unfortunately, despite their best efforts, his true King arrives to soundly defeat them in battle and throws them into the dungeon. Luckily, the only other occupant points them to a secret exit, and after they escape, they flee directly to Endor.

In Chapter 5, Meena is attempting to continue her fortune-telling business, but Maya blows all the gold they'd earned on their journey at the Casino, leaving them fairly stranded in the city. Luckily, the Hero has been told to seek out his destined allies, and locates Maya and Meena in short order. When Meena reads his fortune, she realizes that he is the prophesied Hero and immediately joins the party.

The two are briefly separated in Con Cave and are approached by demonic doppelgangers of The Hero (while The Hero also battled doppelgangers of the sisters). When coming across the real Hero, Meena is more trusting while Maya quizzed him/her. Afterwards, they regroup and find the Symbol of faith.

A while later in Chapter 5, the party confronts Balzack, at Castle Zamoksva. He has used an imperfect version of the Secret of Evolution to become Baalzack, but the party is still able to kill him, avenging the death of the sisters' father at long last. 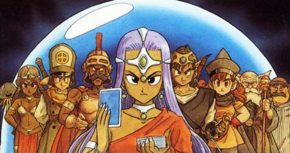 The cards do not lie.

Meena's abilities in battle are styled after the Priest vocation in Dragon Quest III, possessing approximately half of the pastor's spells. She has sole access to the Woosh series of spells which give her more reliable offensive utility than Kiryl's Whack spells, but she is only able to heal one character at a time whereas the former will learn Multiheal. Relying on Meena to revive deceased allies is a gamble as she only learns Zing, but in dire circumstances she is an asset with the party-restoring Kerplunk--this spell alone can completely turn the tide of battle and snatch victory from the jaws of defeat at the cost of her own life. Meena is also the only chosen one to learn the vital Insulatle spell, making her a crucial ally against the Lord of the Underworld and other enemies that rely on breath attacks.

As a spell caster, Meena possesses low Resilience and HP, but high Wisdom, Luck, and MP. She also enjoys a higher-than-average Strength when compared to the other magical characters until her sister's strength rises suddenlt at higher levels. Meena has access to some powerful equipment such as the Falcon knife earrings and Liquid metal sword, but she will be quickly surpassed in physical combat by Ragnar and Alena unless seeds are applied to boost her might. 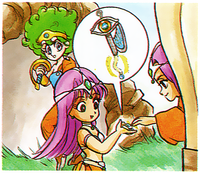 Handing over the ultimate key.

One of Meena's most unique traits is her ability to read her Silver tarot cards during battle, with each drawn card causing a unique effect. The effects of the cards ignore any resistances a monster may normally have, save for bosses. If the player orders her to divine more than three times during a single battle, the Fool card will always be drawn. Also, Meena can use the cards outside of battle to read the player's fortune. This will not affect the game, but provides interesting dialogue from the Seer.

Meena appears along with the other Chosen Ones in the near-future version of Reaper's Peak, having set up shop to tell fortunes in the village much to her sister's annoyance. When reading the palm of the Hero, she notes that she sees nothing at all in his future and cannot gaze into his soul. She notes that this means the young man has an incredible burden that he must bear, but reassures him that if he follows the path that he knows to be true then he will find happiness at the end of the long road.

When spoken to again, Meena will mention her love of caves and tombs.

Meena appears as one of the special guests at the Quester's Rest in Stornway. This could be obtained when the DQVC was available using Nintendo's Wi-Fi Channel. When spoken to, she gives the player different pieces of her outfit for fulfilling certain conditions.

Meena first appears in the Version 1.5 update of the game, both as a quest giving NPC and as a fortune teller who can influence a player's game for up to two hours.

Meena appears as one of the new playable characters in the second game. Her Coup-de-Grâce is Starfall, which summons a meteor shower to strike all her enemies. She uses her tarot cards as her weapon of choice, which she utilizes in many of her attacks, and being able to cast the Woosh series of spells and Multiheal.

Meena is one of the original leader characters in the game, representing the Fortune Teller vocation.

Meena is the English phonetic spelling for the Korean word for twin, Miena.