The golden tiara (おうごんのティアラ ōgon no tiara), also known as the golden barrette, tiara or spellward circlet, is a piece of headwear in the Dragon Quest series that first appeared in Dragon Quest V. Designed for women, it guards against various status ailments. 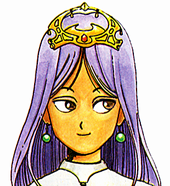 Unlike other games in the series, the tiara is an accessory. It increases Luck by +13, changes the wearer's personality to Princess. It only appears in remake versions of the game and can be sold for 3,750 gold coins.

The golden tiara may be purchased in Porthtrunnel, Mintos, Femiscyra, and found in the Pharos Beacon. It has a defence bonus of +12, and reduces the accuracy confusion spells and abilities to 1/3rd. 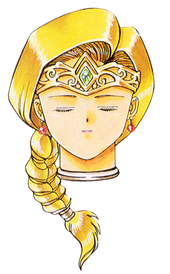 The golden tiara has a defence bonus of +45, and reduces the accuracy of Fuddle, snooze, fizzle, and whack to 1/8th, setting the precedent for the majority of its later appearances. It can only be worn by human characters, and is found behind a locked door in king Dominicus' Domain.

The tiara is found in Mortamor's dreadlair, and possesses the same parameters as before. It may be equipped by Milly and Ashlynn.

The golden tiara has a defence bonus of +43, a style bonus of +50, and increases resistance against Fizzle, Fuddle, Snooze, and Dazzle. It can only be worn by Maribel and Aishe. The golden tiara can be worn by placing first in the Wisdom Ranking of the Excellence Grading Organisation with a female character. It can be sold for 8,500 gold, but it is not recommended to do so.

The golden tiara has a defence bonus of +43. It can be worn by both Jessica and Red. Increases resistance to Fuddle, Fizzle, Snooze, and Whack spells.