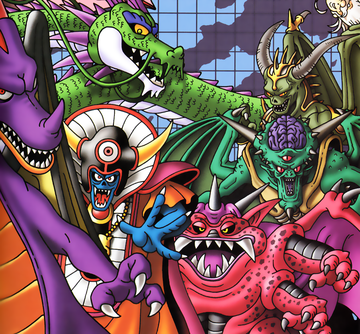 The Final Boss of each Dragon Quest game is usually the last encounter in the game. They are unique as they each have different forms in battle (especially in the Zenithian Trilogy). Many of these also appear as special creatures in the Monsters series, and most of them show up as legacy bosses in Dragon Quest IX: Sentinels of the Starry Skies.

The Final Boss of the very first Dragon Quest game is the Dragonlord. Before the game starts, he stole the Ball of Light to conceal the kingdom of Alefgard in a veil of darkness. That all came to an end when the descendant of Erdrick came to Dragonlord's Castle and defeated him in battle.

The Final Boss of Dragon Quest II is Malroth. After the death of the evil sorcerer Hargon, this Demon Lord rises to finish off the Heroes and make sure evil conquers all.

The Final Boss of Dragon Quest III is Zoma. Having traveled to Alefgard after the defeat of the Baramos, the party confronts his master and vanquish with the Sphere of Light, thus setting the stage for the other games in the Erdrick trilogy. First introduced the Disruptive Wave technique.

The Final Boss of Dragon Quest IV is Psaro the Manslayer ("Necrosaro" in the NES localization). The demonic transformation of the game's main villain, Psaro, he sought to unleash the power of the Secret of Evolution as the Master of Monsters. Distinctive for having a total of seven forms in the battle.

The Final Boss in Dragon Quest V is Grandmaster Nimzo (also translated as "Mildrath" or "Mirudraas"). He is known as the lord of evil and has imprisoned the Hero's mother in Nadiria, waiting for the Legendary Hero to arrive.

The Final Boss in Dragon Quest VI is Mortamor (also translated as "Deathmore" or "Deathtamoor"). After two confrontations with the party in separate forms, the Demon King sheds his body apart and attacks with his (disembodied) head and hands. However, even after becoming more powerful, Mortamor is still no match for the Hero and his party. Everyone soon rejoices the heroes' victory over the evil Devil Lord. An alternative ending happens when Nokturnus instead defeats Mortamor. This only happens when you defeat Nokturnus under twenty turns.

The Final Boss in {}Dragon Quest VII}} is Orgodemir. After being revealed for impersonating The Almighty, the Demon Lord escapes into the Cathedral of Blight awaiting his enemies in the throne room. Upon his ultimate defeat, Orgodemir curses The Almighty and all those who follow him and disintegrates.

The Final Boss in Dragon Quest VIII is Lord Rhapthorne. After his first defeat, Rhapthorne absorbs the entire Black Citadel, and transforms into a stronger being: a large, bloated devil looming over the land. However, his reign of terror wouldn't live long enough as he is defeated by the party, riding on Empyrea's back.

The Final Boss in Dragon Quest IX is Corvus, in his demonic state. He is the one who resurrected the Gittish Empire and the dark dragon Barbarus so he could destroy the mortals of the Protectorate, in retribution for the betrayal and suffering he endured.

The Final Boss in Dragon Quest X is Hades Nergel. When confronted by the Hero, he attempts to defeat him/her using his human form, and later his demonic form. Upon being defeated, he warns of dark powers beyond his control before dying, and although the Hero was successful in escaping, he/she wasn't able to break the seal of darkness over Rendashia.

The Final Boss in Dragon Quest XI is Calasmos. A malevolent being of impressive power, also known as the Dark One, he is responsible for the sorcerer Morcant betraying Erdwin, allowing for his transformation in Mordegon. While reduced to a corrupted Spirit of Lost Time in the original timeline and unable to acquire his original body, which was sealed in Erdwin's Lantern, he was able to follow the Luminary into the altered timeline, using the second demise of Mordegon to achieve unity once more. Upon his destruction, Calasmos rues his defeat but not before telling the party that light cannot exist without darkness.