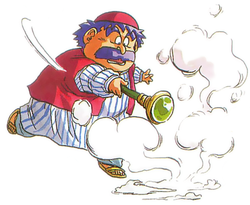 Wands are a recurring type of weapon in the Dragon Quest franchise. This weapon is favored by magical characters such as mages, priests, and sages, and many can also cast second tier spells if used as an item during battle. Notable staves in the series include the Lightning staff and and the Magma staff, the latter of which is typically required to advance the story.

As of Dragon Quest X, there are now two different weapon types that are classified as wands: one-handed wands and two-handed heavy wands. In Japanese versions of the games, they are known as sticks (スティック, Sutikku). Many of the staves and wands that have appeared in other games throughout the series have now been classified as heavy wands, while wands are one-handed weapons suited for healers and can recover the wielder's MP by striking an enemy.

NOTE: Prior to the release of Dragon Quest IX, wands were alternatively referred to as staves, and some individual weapons still retain the nomenclature. In spite of this, none of the weapons listed here bare any relations to Bo staves

All three characters can use staffs.

Staffs are restricted to priests, mages, and sages.

Staffs can be used by Kiryl, Borya, Meena, and Maya.

Most staffs could be used by Bianca, Nera, and the hero's daughter. Some can also be used by the the hero though.

Every human character can equip at least one staff, and Slime Buddies may only equip the staff of Ghent in the DS version.

Staffs can be used by Maribel and Sir Mervyn.

Both Jessica and Angelo can equip wands, referred to collectively as staves, though there are some slight differences in their skill sets. After investing enough skill points, equipping a staff will increase the wielder's maximum MP and allow them to regenerate between 3~10 MP each turn in battle.

These weapons can be equipped by mages, priests, paladins, armamentalists, and sages, as well as any character who fully masters the wand skill.

Wands can be equipped by Priests, Paladins, Luminaries, Dancers, and Druids.

Wands can only be equipped by Serena.

Wands are the main weapon type of Nera and are wielded exclusively by her. In this entry, wands are a long-range weapon that produces magical bubble projectiles that are launches towards the enemy.

Wands can now be equipped by either Lazarel or Teresa if their class is a Mage, Priest, or Sage.