Dirkandor, is a castle in eastern Torland. It is located on an island accessible only via ship or Teleportal in Dragon Quest II. 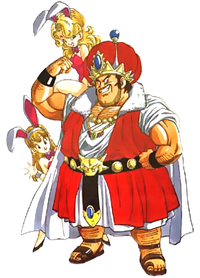 The King with his pet rabbits

Dirkandor is home to the Moon Sigil, which is held by the king. Speaking with the king gives the Luminaries an opportunity to win the crest by defeating a single Striking sabrecat.

The shopkeeper has the Tectonic Plate and a Divine Dagger in his personal chests behind the counter. This room is locked behind a door that requires the Gold Key.