The Sea Cave is normally surrounded by shoals. This keeps the heroes from gaining access to it until later in the game. After acquiring the Moonshard, the heroes can remove the shoals by using it in front of the cave entrance.

The cave is one of the more difficult dungeons in the game, along with the Cave to Rendarak. There are multiple basements with many misleading and dead end staircases, along with powerful enemies on the lower basement levels. In addition, this is the only location in the game where lava is a hazard which will damage the heroes with each step. However, it can be avoided like other hazards with Safe Passage.

To get to the False Idol, first find your way to floor B1. From there, head west down the passage, and take the second south opening. Continue west, and head north through the lava once you hit the wall. On floor B2, head past all the tempting staircases marked with torches, and follow the path around to the south. Take the first staircase you see on the main path. On floor B3, go straight northwest into the lava lake, and take the only staircase. Now that you're on floor B4, simply follow the path around to the altar, and defeat the two Whackolytes guarding the artifact. 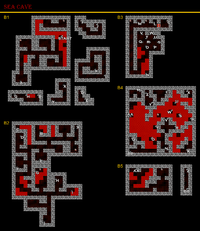