Revision as of 17:51, 5 June 2022 by On the Faultline (talk | contribs) (→‎Gameplay)
(diff) ← Older revision | Latest revision (diff) | Newer revision → (diff)
DQS redirects here. You make be looking for Dragon Quest of the Stars.

Dragon Quest Swords: The Masked Queen and the Tower of Mirrors (ドラゴンクエストソード 仮面の女王と鏡の塔 Doragon Kuesto Soudo: Kamen no Joou to Kagami no Tou) is a Dragon Quest spinoff game for the Nintendo Wii. 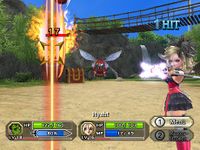 A typical battle in Dragon Quest Swords. Fleurette is about to cast Squelch on the Hero to cure his Poison status.

Unlike most games in the series, which are turn-based role-playing games, Dragon Quest Swords is first-person action game in which the player uses the Wii remote to fight with a sword and shield. On all levels except for the first or those in which he might elect to fight alone, he is accompanied by three non-playable characters who appear from time to time to aid him with spells.

The most important part of gameplay is sword combat. Using the Wii' remote's internal motion sensor, the player makes gestures intended to emulate the strikes of a real-world sword, which the game then interprets as one of a few preset possible moves and executes on-screen. Sword strokes can be vertical, horizontal, or diagonal, and all of them can be done in any direction (regardless of the laterality chosen at the beginning of the game.) Better swords deal more damage. Since attacks are not one-to-one with the Wii remote, which would leave massive blank spots in attack arcs, the player may freely move a cursor and click any point on the screen using the A button, which sets a focal point for the attacks that follow. The focal point expires after a few seconds of no attacks inputted, automatically returning to the centre of the television screen.

As the player kills enemies, a gauge will in the bottom-left corner of the screen will begin to fill; once it reaches 100% he is able to execute any of the powerful Master Strokes he has so far unlocked.

The player also has access to a shield, which is activated by pressing the B button and manipulated like a cursor. Melee attacks are the player's responsibility, but distance attacks are telegraphed by onscreen prompts indicating the best place to position the shield; however, certain attacks are better repelled back towards enemies using the sword. The shield has its own Hit Points that gradually decrease as it blocks attacks, and eventually pieces of it will begin to break off (in accordance to which parts of it are blocking attacks); however, Replenishield Powder can be used to instantly fully restore it. Some spells also affect the size of the shield. Better shields are both larger and more durable.

Whichever character is currently with the Hero will cast spells from time to time of their own volition (for example, attacking when the duo is confronted with many enemies at once, or healing when either character's HP becomes low), and can also be directly commanded to use them from the pause menu.

Outside of combat, the player walks with the B button or Control Pad, gradually progressing through the level he is currently playing. As he walks, he encounters scripted points where groups of enemies attack; they must all be defeated in order to move on. He may also find rocks, shrubbery and other objects that can be investigated for possible minor rewards such as gold coins and Mini Medals.

After each level, the player returns to town, where he may buy items and equipment, exchange Mini Medals for prizes and speak with the local population.

Completing the main story on Normal mode will unlock more powerful "mirrored" versions of the main storyline's bosses in the Olde Reflectory. In turn, defeating those bosses unlocks Payback Mode, a "New Game+" mode which allows the player to start a new save file with the most powerful sword.

After completing each level, a score is tallied depending on how well the hero completed the level. This score determines what rank the player receives, which determines the type and number of reward items. Bonuses are awarded if the player some specific criteria while completing the level. See List of level bonuses in Dragon Quest Swords for full information regarding bonuses.

As the game opens, the Hero is on the verge of completing his training with the sword, proving it to local alumnus Swordmaster Dao. However, he is tasked with one more challenge before definitely gaining the respect of his teachers and contemporaries: He must travel to the Caliburn Cave and defeat its guardian, Sir Dirk Worthington. 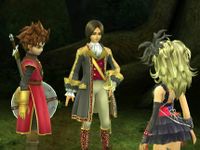 The Hero and Anlace meet Fleurette.

After doing so, he manages to get the attention of Prince Anlace, who is worried about the recent strange behaviour of his mother, Queen Curtana. After paying a visit to the Hero's home to try and enlist the help of his father, Claymore, he instead appeals to the Hero, who, on Claymore's ironic advice, readily agrees. The two head into the Galantyne Glades, where the Queen has a retreat. They arrive and, after battling a Golem, catch a glimpse of the Queen as she leaves her cabin, and notice her wearing a strange mask. Shortly after they meet Fleurette, a former nun who believes she may have some idea of what's going on with her.

Fleurette leads the Hero to Arondight Heights, where, after scaling the hills and defeating the Emissary of Xiphos, they view a huge tableau carved into the side of a mountain, which can only be correctly viewed from that lookout. It depicts four heroes conquering Xiphos a short time in the past, using the mask they saw the Queen wearing.

After returning to town, the party hears rumours of a horrible monster ravaging the Secace Seacove (the same monster seen in the opening FMV). Claymore accompanies the Hero as he delves into the caves and confronts the monster, only to see Fleurette have him stay the killing blow, suddenly revealing that he is her brother. Troubled by this news, the party agrees the time has come to climb the Tower of Mirrors to learn the truth for themselves.

After ascending the Tower and defeating the minion Xiphos sends to kill them, and the Hero slices the strange mask clean off Curtana's face. Suddenly, an effigy of Xiphos appears from the Mirror World. The party learns that the demon king is alive and well in spite of his prior defeat - in fact, he used the Rorrim Mask, which was implemented in his original downfall, as the very tool of his survival. When Curtana tried to use it when she sensed his power amassing anew, he took over. With the mask destroyed, he stands poised to attack once again.

Minister Misericord, Curtana's chief retainer, suggests that they return to the top of the Tower to enter the Mirror World, where Xiphos had erstwhile been hiding. After flying down a long, surreal tunnel of energy, the party emerges at the feet of a blacksmith god, Draug, who, after testing their worthiness to use them, first repairs the Rorrim Mask and then gives them Rednusadner, possibly the only sword in the world capable of harming Xiphos. 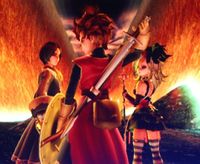 The heroes of Dragon Quest Swords cross the Red Sea on their way to the Deathbringer's Castle.

Thus equipped for action, the party travels to Galantyne Glades once more, by which they traverse the Red Sea, which parts thanks to the powers of Rednusadner, and finally manage to reach the Deathbringer's Citadel, which has suddenly appeared thanks to his magic.

After climbing to the top of his grotesque fortress, the Hero and his chosen companion square off with Xiphos, first going sword-to-sword with him, then taking on his monstrous transformed state, which is capable of using Master Strokes of his own. Even this dragon-like form falls to the Hero's might and his friends' support, however, and the Hero strikes the killing blow, shattering Xiphos's body and bringing an end to his reign of terror once and for all. The castle begins to collapse with its master's defeat, and the group barely makes it out; the Hero nearly falls into a lake of lava but is saved as his companion manages to catch onto and somehow haul him to safety.

Overjoyed, the Queen and everyone else throw a celebration party for the Hero. The game ends as the Hero (and the player) thrusts his sword into the air, inspiring all who witness his prowess and dedication.

The post-game features include the ability to fight a number of Mirror bosses and unlock stronger weapons and a special new game+ plus mode called Payback Mode.

Dragon Quest Swords takes place in its own world, unrelated to those of any previous Dragon Quest games. Due to the more straightforward nature of this game's progression, its world, a single country called Avalonia, is significantly lesser in scope than most.