Gwaelin has three distinct designs, the first of which being a traditional princess dressed in a soft-yellow, frilly gown with puffy shoulders, a large sky blue waist ribbon with a blue gem set in a gold pin, and a golden tiara set with one large sapphire adjourned with rubies on both sides. Her second design is shown in the Battle Road arcade series, wherein she wears a pink gown with sleeves that extend and split along her mid-forearm, and a white sash along her waist. The third design is seen in Dragon Quest Builders, and is a white version of her original dress with a golden trim sewn into it at ankle-height and a different tiara design. In all appearances her necklace stays the same, and her hair is always a faint ginger or light brown.

Gwaelin is a young woman well trained in the etiquette expected of her standing, and her optimism is utterly indomitable no matter how grim the situation. This aspect of her is highlighted in Builders, where her resolve spurs the people of the rebuilt Tantegel into action. The princess is prone to bouts of girly glee when she is happy, to the point that she'll even audibly squeak when particularly pleased. She is, however, still a princess, and will not take no for an answer under any circumstances--trapping the player in an endless dialogue loop and pouting until she gets her way. When rescued by the Hero in the original game, she immediately falls head over heels for her savior. 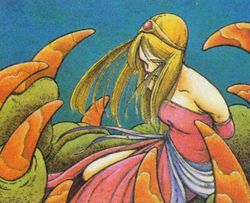 The Hero may rescue Gwaelin during his quest to defeat the Dragonlord, though this is not a requirement to complete the game. She is located inside the Quagmire Cave south of Kol which connects to the southeastern continent. In order to rescue Gwaelin, the Hero must fight and defeat a ferocious Green dragon that guards her (rather lavish) cell. This monster is not visible on the dungeon map screen, but rather is trigger when the Hero steps on a specific tile (similar to the Golem which guards Cantlin). If the Dragonlord is defeated prior to the Princess' rescue, she will still be in her cell and able to be rescued, though the Green Dragon will not be present.

After rescuing the princess, the Hero carries her back to her father at Tantegel castle. A sprite showing the hero carrying Gwaelin is used at this time. In the remakes of the game, the Dragonlord has a special reaction if she is being carried when the Hero confronts him. He laughs heartily at the absurdity, and 'thanks' the Hero for his kindness in bringing the Princess to him.

At Tantegel Castle, Gwaelin gives the Hero an item called the 'Princess Pledge' which tells the Hero his exact distance from Tantegel on the map of Alefgard at the time it is used. It is useful in finding the Emblem of Erdrick later in the game. While at the castle, her highness occupies the empty space next to her father in the throne room. When spoken to in the NES version, she asks the Hero if he loves her. Answering yes triggers the short love music to play.

If the Hero rescued Gwaelin during the game, then she will be present during the ending and join the protagonist on his journey to establish his own kingdom. The Hero will again carry the lass away as he leaves Alefgard after defeating the Dragonlord. If the Hero is already carrying her when the ending begins, the result is much the same, though a single line of dialogue is different.

Eventually she and The Hero get married and settle in Torland. They have three children, who establish the kingdoms of Midenhall, Cannock, and Moonbrooke. 100 years later, their descendants become the heroes of Dragon Quest II. Also, a tunnel leading from Cannock to Moonbrooke was named after her.

Gwaelin appears as an NPC in the Tantegel section of the Echo Chamber. She is not the focus of the disruption in time, as instead her father has been cursed to be unable to speak.

The princess is once again found in the Quagmire Cave being guarded by a green dragon. Once the serpent is slain she will allow Terry to carry her outside, but upon seeing the lad is half her size she decides to wait for a stronger hero to arrive and sweep her off her feet.

The princess shows up as a playable character in Theatrhythm Dragon Quest.

The princess is an NPC in the final chapter of the game, having recited a charm to turn herself to stone in order to escape the agony of her Hero's betrayal and the despair the Dragonlord wrought once he blacked out the sky and banished the basics of building from those living in Alefgard. Gwaelin remained in stasis for approximately 100 years until the Builder revives her with a phial of Holy water. When spoken to in the first section of the chapter, she will restore the builder's HP.

Unlike other characters in the game, the princess immediately recognizes the player as the legendary builder and encourages them throughout the chapter. She dutifully prays that Rubiss bestow her blessing upon the builder, which allows the goddess' voice to penetrate the miasma covering the land and speak with the player directly. Just prior to her awakening, she received a vision from Rubiss telling her that three sages will need to join her in Tantegel, uniting three divine artifacts to restore the land. These sages are the principal npcs of the previous chapters.