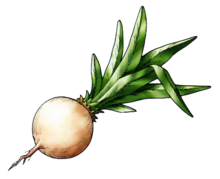 Moonwort bulb (formerly Full Moon Herb and MoonHerb) is a recurring curative item in the Dragon Quest series. It is used to alleviate the paralysis status effect and, in VII and VIII, slumber.

Moonwort bulbs are very vital in their first appearance, as the paralysis status does not remedy itself during battle and if the whole party is stunned it counts as a wipe out.

The spell Tingle has been modified to affect all party members, diminishing the importance of the plant slightly. However, as only Meena will learn the spell most players keep a few in stock for when she is incapacitated or not in the party.

Several monsters will learn Tingle, further reducing the importance of the plant. However, due to the random nature of taming it is still advised to have a bushel on hand for safety's sake. Furthermore, the accuracy of the enemy version of Burning Breath has risen significantly in the DS and mobile device versions of the game, thus necessitating cultivation for allies who aren't outright immune to being paralyzed.

Paralysis has been modified to wear off in battle after a number of turns, as with bedazzlement and sleep, making moonwort bulbs entirely unnecessary. Additionally, any character can learn Tingle after reaching rank 4 in the Priest vocation.

Moonwort bulbs have been cross-pollinated extensively to breed a more useful root, curing sleep as well as paralysis.

The Moonwort bulb was yet further refined, now targeting everyone in the party. Additionally, three bulbs can also be mixed to make a Moon's mercy. They are also used to create a Rose-wort and Mystifying mixture.

The moonwort bulb has lost its anti-narcoleptic properties, but is featured in the same recipes as before (sans mystifying mixture) along with the Panacea.