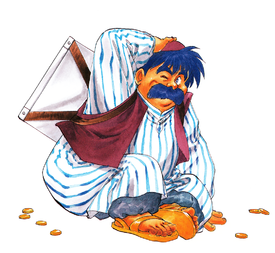 Gold or gold coins (with the currency symbol of G) is the standard unit of exchange used in the Dragon Quest games. Gold is needed to purchase weapons, armor, items, getting Casino tokens, taking an item out of the vault, as well as to stay at most inns. You can get gold from defeating monsters as well as obtaining it from treasure chests or selling your old equipment and unused items.

Gold is also subtracted if the player dies in battle in order to be resurrected (though the main character will still be resurrected even if there's no gold).

The value of gold coins is not consistent across Dragon Quest titles and a particular item frequently costs more or less depending on the game. That said, it's interesting to note that gold coins can be considered a sort of auxiliary world currency, as they are accepted everywhere throughout a particular game's world (though even in that world one item may have a differing value, possibly suggesting a sort of exchange rate.)

Starting with Dragon Quest III, gold can be stored within vaults, though the minimum amount that can be deposited is 1,000 coins. Gold that is stored in the vault will not be taken if the main character(s) is killed. Remakes of Dragon Quest & Dragon Quest II also had vaults implemented.

Starting with Dragon Quest VI, vaults were replaced with a bank which unlike the former, stored only gold rather than with equipment.

Other means of obtaining gold[edit]