Revision as of 05:28, 22 May 2022 by On the Faultline (talk | contribs) (→‎Soundtrack)
(diff) ← Older revision | Latest revision (diff) | Newer revision → (diff)
This article is about the original game in the Dragon Quest series. For series information, see Dragon Quest (series).

Dragon Quest (ドラゴンクエスト, Doragon Kuesuto) is the original Dragon Quest game which preceded the entire Dragon Quest series. It was developed by Enix and released in 1986 in Japan for the MSX and Famicom consoles. The game was localized for North American release in 1989, but the title was changed to Dragon Warrior to avoid infringing on the trademark of the pen and paper game DragonQuest. The North American version of the game was greatly improved graphically over the Japanese original, and added a battery backed-up save feature and 5 password systems, whereas the Japanese version used a password system. Nintendo was impressed with the Japanese sales of the title and massively overproduced the cartridge; the end result was that Nintendo gave away copies of Dragon Warrior as an incentive for subscribing to Nintendo Power, the company's in-house promotions magazine.

Finally, after strengthening himself through all the battles he had fought and the mystical items he had uncovered, including Erdrick's own sword, the Hero entered Charlock Castle, the Dragonlord's domain, and killed him, temporarily freeing Alefgard from the terror of evil. Gwaelin proposed to him and King King Lorik offered him the throne; he accepted the former offer but declined the latter, opting instead to venture to lands unknown and establish his own kingdom. 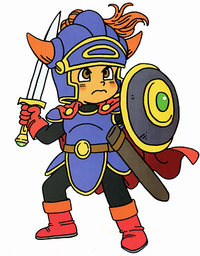 A special free version of the game known as BS Dragon Quest was available to play on the Satellaview peripheral during the early months of 1996. This version of the game used the art assets of the 16-bit remake, included voiced dialog for additional scenes, and additional features not seen in any other version since.

As the first game in the series, Dragon Quest introduced several monsters that proved instant favorites among fans. In particular, the Slime, Dracky, and Chimaera are featured in almost every other game in the main series and spinoffs.