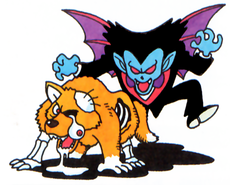 The Undead family (Japanese Katakana: ゾンビ Romanji: Zonbi) refers to certain types of monsters in the Dragon Quest series. A staple of role playing games the world over, the Undead family includes animated corpses, skeletons, angry spirits, and even fallen priests. Starting with III, the undead have been assigned extra damage tags that activate when the appropriate weapon strikes them.

Being the first entry in the series, classification of monsters is rudimentary and based on physical appearance rather than statistical classification. As such, the Undead are not uniquely affected by any spells or items.

Monster classification is still not a part of the game's coding, but this entry is notable for introducing players to the staple monsters Walking Corpse and Spirit, as well as their many pallet swaps.

Zombies are now recognized by the game's coding, much like Dragons. They will receive 16~32 more damage when struck with the Zombiesbane in the original version, and 50% more damage in the remake and subsequent ports.

The Pearly Gates deals 30% more damage to the Undead, and Undead Undoer will deal an extra 50%. The latter skill can also stack with the bonus damage of the Zombiesbane.

The Undead are considerably more durable to physical attacks in the eighth entry of the series, taking only 70% damage from even fully tensioned characters. This is thanks to an effect tag worked into the game's programming, and cannot be negated. The Zombiesbane deals only 30% more damage this time around. However, it can be improved through alchemy to become the Zombie Slayer, which deals 60% more damage. The affects of Pearly Gates remain the same. 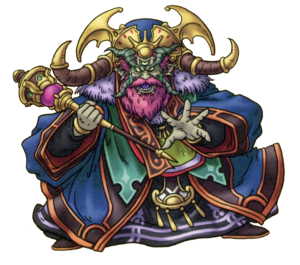 Zombies will receive an additional 10% damage when struck by staves. Furthermore, they will take 20% more damage when attacked with the Holy Lance, Battle Fork, Celestial Spear, and Divine Dagger. The skill Deliverance effectively replaces Undead Undoer.

Gallery of the Undead[edit]