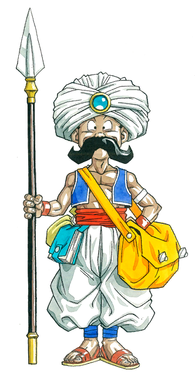 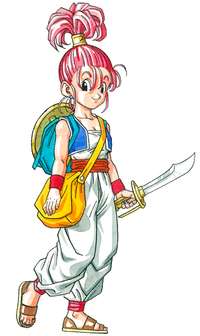 The Merchant (商人, Shounin) is an infrequently occurring vocation in the early games in the Dragon Quest series. Merchants have the ability to pick up additional gold after a battle, as well as appraise items free of charge. In battle, merchants are only average in attack and defense, slightly better than a Priest. In Dragon Quest III, this is the only vocation required to advance the plot.

Merchants are average to poor in all attributes, with an occasionally high wisdom stat to reflect their shrewd business sense. A merchant will not win the day for any party and only contribute minor damage in battle, but their real contribution is how quickly the group can amass money with one around.

In addition to being able to find extra gold after battles, a merchant is also needed to progress through the story. An old man in a field on the North America-esque continent requires one to help him build a town, and will take a merchant regardless of their level. The merchant you leave will drop his/her items off at the vault (bag in the Super Famicom and Game Boy Color Version).

While the town develops well, the merchant will eventually be jailed due to pushing the townspeople too hard and succumbing to greed. Prior to being arrested, they obtain a Yellow Orb which he/she will inform The Hero is in his/her house. The merchant will not be able to rejoin the party in the NES version. In all remakes and subsequent ports, the merchant will be freed from prison after Ramia is hatched. Said merchant will be playable again if approached, and will wait for the player in Aliahan.

Merchant is one of the prerequisites for the Ranger vocation (along with Monster Master and Thief). Though the vocation reduces most of a character's stats, a merchant will gain additional gold at the end of battle as their rank increases.