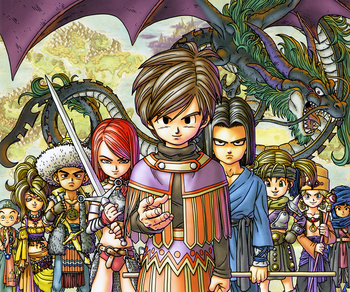 The Hero and the vocations

There are a total of twelve vocations in Dragon Quest IX: Sentinels of the Starry Skies. Six are available initially, while others must be unlocked via quests. The vocations are: Armamentalist, Gladiator, Luminary, Mage, Martial Artist, Minstrel, Paladin, Priest, Ranger, Sage, Thief and Warrior.

Similar to Dragon Quest III: The Seeds of Salvation, a vocation defines all initial attributes of a character such as stat growth and party function, which can then be customized by the player via stat enhancing seeds and by mastering skills. Note that unlike Dragon Quest III, there is no "Hero" vocation; the Hero starts out as a Minstrel and can freely change into any other profession.

Vocational change can only take place at Alltrades Abbey, which is located on Newid Isle. This is not available until after a specific plot point that takes place approximately one-fifth into the game, and the player must find Abbot Jack in the Tower of Trades before they will be available to change a character's vocation.

Once the Sage is unlocked, characters can learn "Jack's Knack," which enables changing jobs on the field.

When changing vocations, the character's gear will be swapped out to whatever they wore the last time if the new vocation allows it to be equipped, otherwise they must be outfitted with new armaments. Levels are separately tallied for each vocation, and the player can review a character's vocations (and their stats for each) by selecting "Attributes" under the main menu.

A mastered skill is permanently memorized by a character and can be freely transferred between jobs, but spells are locked to a vocation and cannot be carried over. For information about skills available to each vocation, see Lists of skills in Dragon Quest IX.

After completing the main storyline, Abbot Jack will offer revocation services to any character that reached level 99. Revocation resets the character back to level 1, allowing them to accumulate more skill points. They must still re-obtain all their spells and stat progression (though seed bonuses remain intact). A commemorative accessory is granted the first time any particular vocation is revocated.

A character can only revocate an individual class up to ten times maximum. If the hero revocates a vocation up to this maximum, a special accolade is presented. Furthermore, revocation is a way for players to influence the Grotto map generation system to develop caves with stronger monsters and items, as well as improve the chances of getting rare items from blue chests.

The following quests are required to unlock the six additional vocations: