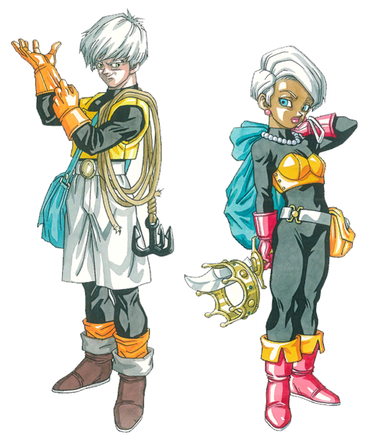 If you become a thief, you'll be able to steal your enemy's belongings. You will also be able to tell how much treasure is in the vicinity. --Description in Dragon Quest VII

The Thief (盗賊, Touzoku) is a class in the Dragon Quest series. True to the vocation's name, it focuses on acts of Thievery to half-inch a monster's possessions.

Thieves have high agility and deftness, but are below average in other attributes. What makes them vital to a party is their ability to steal items from the last monster defeated at the end of a fight. Outside of this pilfering, a thief contributes to the party by utilizing their stealth to lower encounters with enemies with the Padfoot ability, exploration skills such as Eye for Distance that allow the player to locate villages and nearby towns, and using Nose for Treasure to see how many chests remain on a dungeon's floor.

Thieves were added in the 16-bit remake and may steal from a random enemy vanquished in an encounter, with the success probability being calculated thus: (Level/16 + 1) x item drop rate for the Super Famicom and Android/iOS version. In the Game Boy Color version, the formula is (level/8 + 1) x item drop rate, and will only work for the final enemy defeated. Unlike later games in the series III's thieves do not have their success rate limited to 1/8th and can effectively reach 100% for most items with a party of pilferers.

Thieves are depicted as cat burglars wearing black body suits with differing accessories, but both wear yellow vests and have bleached white hair. The female thief is based on Japanese Gal culture, hence her deep tan, lipstick, and oversized jewelry.

Due to a character's natural defence being based off of the agility stat in all versions of III, thieves are significantly more durable than in other titles. Furthermore, they can equip the newly added whips and boomerangs that allow them to aid in crowd control despite their low strength.

The thief is one of the prerequisites for the Ranger vocation (along with Monster Master and Merchant).

The calculation for post-battle stealing is Drop rate x (Rank+1) x 0.25, doubling the base rate at Rank 8. This means a party of thieves will have an 8 times higher chance to nab an item. Note that the chance to steal any item has a hard limit of 12.5% (1⁄8) regardless of vocation rank. 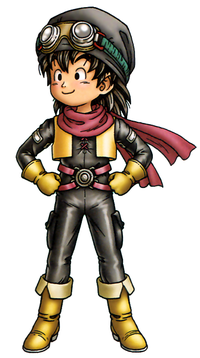 The thief is one of the basic vocations available at Alltrades Abbey. It is one of the prerequisites for both the Pirate (along with Sailor) and the Monster Masher vocation (along with Shepherd). In the 3DS remake thieves are depicted as cat burglars once more, incorporating bandanas and goggles into the familiar black and yellow outfits.

The MOD / (Drop Rate * 4) equation for both versions of VII is slightly different from the previous Heartbeat title, but functions similarly and also has the enforced limit of a 1/8th success rate when the party consists of thieves.

The Thief's best skill is Nose for Treasure which allows treasure hunters to know how much treasure is left on a particular floor. As for hybrid skills, Thief Hit, the hybrid skill of a Warrior and a Thief, is probably one of the useful hybrid skills to learn as it has the chance of taking one item from a monster regardless of whether or not it is defeated. However, the default stealing rate is quite low. To this end, the character must have a high rank in the vocation to steal reliably.

The Thief vocation is available at the start of the game and has the unique skillset "Acquisitiveness". As all the vocation designs in IX are based on real world cultures, thieves have eschewed the burglar outfits for clothing based on Arabian bandits. Thieves can also use skill points to learn Sword, Knife, Claw, and Fisticuffs skills. Their Coup-de-Grace is "Itemized Kill," which guarantees treasure dropped after the battle. Thieves still possess their unique ability to steal items, but through the newly added skill "Half-Inch".

Thieves are the second fastest vocation in the game, trailing behind the Martial Artist. They also have the second highest Deftness in the game, which allows them to not only steal items at a higher success rate, but land more Critical Hits as the feature now scales off of Deftness.

However, Thieves are thoroughly lacking in other stats, such as MP and Resilience, and aren't great combat-wise. Rangers are commonly agreed to be an upgrade from the Thief, due to their higher Deftness, MP and magic selection and abilities. Despite this, their niche abilities, such as Treasure Eye Land, and their fantastic Agility and Deftness prove useful for grinding and farming, even far into the post-game. 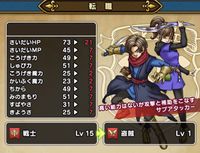 A warrior changing to a thief in Walk

The thief vocation is available to players from the beginning of the game, and gives access to Boomerangs, Claws, and Knives.