The Manglegrove is a jungle located southwest of Heliodor in Dragon Quest XI. Here, the Luminary first acquires the Fun-Size Forge from Erik.

The Luminary and Erik first head there from the Heliodorian Foothills after escaping the castle's dungeons to head back to the village of Cobblestone. The duo reach a camp in the center of the jungle where they decide to take a rest and Erik gives the Luminary the Fun-Size Forge and a short tutorial for how to use it, as well as where to find various recipes throughout the world. They find that the bridge leading south to Cobblestone has been destroyed, so they look around for another way to get there.

The tricky devil flying into a rage.

A sad dog outside of the woodcutter's house follows the Luminary to a mysterious glowing plant root, where he is able to see a flashback of the Tricky Devil destroying the bridge south and shapeshifting Flint the woodcutter into a dog. Erik is able to see the vision, as well, and is incredulous afterwards. They decide to double back and look for the treasure chest where the monster has hidden itself.

The devil tries to get the upper hand on the duo, but Erik is unimpressed and mocks it. It becomes incensed and attacks the two, but it is quickly defeated in battle and the woodcutter is returned to his original form. He introduces himself to the Luminary and Erik as Flint and offers to fix up the bridge south as thanks. Flint also explains to the Luminary that what he experienced was the Guidance of Yggdrasil and due to his special power, he should be able to interact with any root found throughout Erdrea. The two then continue on their journey back to Cobblestone.

This is a location where the party can set up camp for the night.

This is a location where the game can be saved. 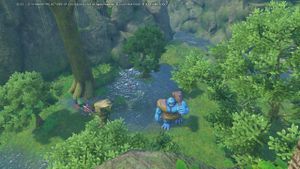 Monster seen in the lower levels of the Manglegrove.