The Argon lizard (アルゴリザード Arugorizādo) is a recurring monster in the Dragon Quest (series) that was introduced in Dragon Quest VIII: Journey of the Cursed King.

An argon lizard is a mid-sized chubby lizard monster. They have red and beige scales and look reminiscent of dragons. They have dinosaur-like arms and legs, each of them ending in hands and feet with little black claws. Their most peculiar body feature is their ear-flaps, that resemble the ones of the australian lizard Chlamydosaurus which they only open when they feel in danger or, in the argon lizards' case, they attack someone.

In the world of Dragon Quest VIII: Journey of the Cursed King, Argon lizards are very important to the kingdom of Argonia, with the prince being required to retrieve an Argon heart in order to prove his worth. The environmentally conscientious need not fret, as the "heart" is just a glorified gizzard stone and removing one is not fatal to the animal. In addition to this, royal lizard keepers are tasked with monitoring the species to prevent them from falling into decline. 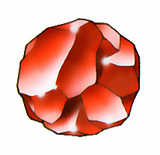 The party needs to help Prince Charmles find the lizards in the Royal Hunting Ground at the east of Argonia in order to be given the magical mirror by King Clavius.