(Redirected from Cave to Rhone)

The Cave to Rendarak is the largest dungeon in Dragon Quest II. It is also the penultimate dungeon in the game. It is located in the south central region of Torland and accessible only via teleportal. 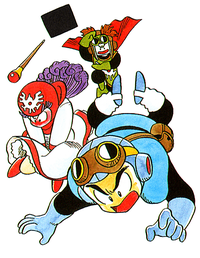 Falling into the pitfall.

The Cave to Rendarak is infamous among fans, due to its length, the strong enemies within, and the existence of pitfalls and infinite loops that no first-time player can be expected to know of.

The cave is only accessible via a travel gate in Beran requiring the Jailer's Key. To open the cave, the False Idol must be used next to the entrance which is disguised as an impassable mountain tile.

Bottom right corner of floor B1 in all versions from the Nintendo Entertainment System to the Game Boy Color version. See the remake section for more details.

Find your way to floor 5. Make your way all the way north, then east into the side room; go down the flight of stairs. There is a pitfall in the almost-bottom-leftmost corner of the (huge) room; find and fall in it. You'll land right next to the sword.

Much easier than locating the Thunder Sword, simply find the staircase in the bottom right area of Floor 3 and take the stairs right to the chest.

The Cave to Rendarak is the finale locale from the second game available via the Echo Chamber. A restless armor has taken upon itself to inhabit Erdrick's armor itself, and it must be dealt with by the Luminary and his party. Unlike the truncated versions of other dungeons that appear in the Echo Chamber, the cave is very faithful to it's original design and will prove the most difficult dungeon out of all the past tomes.