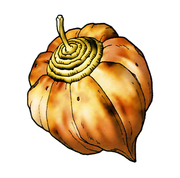 A Seed of Skill is a one-time use item that increases the skill point total of whoever eats it by 5. It only appears in later Dragon Quest installments that use a point-allocation skill system.

The seeds can be found in an overworld chest near Pickham, in pots/cabinets in Neos and Empycchu, and may be purchased once from a midnight shop in Arcadia. A small selection of normal monsters drop them as rare items; Solaris, Great trolls, and Crocodogs specifically, with a 1/64 chance for each. Furthermore, all forms of the Lord of Dragovians have a 1/8 chance to drop the seed.

Regardless of which monster the player goes after, it is 'strongly recommended to make use of Yangus' Stainless Steal Sickle; the acquisition chance will be cut in half, but being able to attempt stealing multiple times in one battle is well worth the trade-off.

Unlike in Dragon Quest VIII, characters can generally gain more skill points through revocation so these seeds aren't as useful.

Unlike previous games, each seed of skill bears only one skill point to the consumer.