"Spotted cube! Give desirable number, or I crush you to dust!"

—Alena, before she rolls the die in Fortune Street (Wii)

Alena is a character in the Dragon Quest series that appears as a playable party member in Dragon Quest IV: Chapters of the Chosen. She is the Tsarevna/princess of Zamoksva, but dreams of becoming the strongest fighter alive. Against the will of her father, she embarks on a journey to prove her strength to the world, accompanied by Kiryl and Borya in the second chapter.

With her cape and pointed hat, Alena somewhat resembles the female mage from Dragon Quest III: The Seeds of Salvation, though she possesses no magical aptitude at all. Though regarded by some as a tomboy, Alena does not forgo her feminine side; she is simply too concerned with improving her strength to be tied down by bothersome traditions and dictations of "proper" conduct. Nevertheless, she does enjoy adding the occasional accessory to her attire.

Alena is a definitive spitfire, unafraid to speak her mind and dead-set on reaching her goals. Despite her high aspirations, Alena is far from the stereotypically serious martial artist, and sees the world around her with the wide eyes of wonder befitting her age. She tires of being coddled by her father and the inhabitants of Castle Zamoksva, and is eager to see the world that she knows exists beyond her bedroom window. Though very stubborn, Alena is far from thick-headed; she immediately jumps on board when faced with her destiny of helping the Hero counter the threat the Lord of the Underworld posses to the world.

Alena has a very competitive nature as well as a love for fighting. As seen through her party chat, she is always itching for sparring opponents to improve her own fighting skills, which is usually the first thing on her mind. When first meeting the Hero, who is looking for the same item she is, Alena declares the search as a competition for who can find the Feverfew roots first. Alena is shown to care greatly for her father and her kingdom, visibly being very concerned when the entire populace of Zamoksva disappeared, and when Kiryl fell under a deadly illness. Later, Alena shows righteous anger when discovering that the monsters were behind the disappearances and develops an unfaltering resolve to defeat the Lord of the Underworld so that her people may return.

Starting with the localization of the DS remake, Alena speaks with a Slavic dialect.

Warning: Spoilers!
Click expand to view content
Chapter 2 begins with Alena begging her father, the King of Zamoksva, to let her explore the world, since strong fighters are needed more and more in their troubled times, with the Underworld creeping out of dormancy. However, he refuses, saying that with monsters showing increasing aggression, it's simply too dangerous to let her leave the safety of the castle. Alena goes back to her room but, within a few minutes, has been overcome with frustration and escapes the castle. 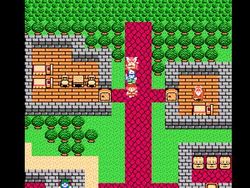 Alena traveling through a town alongside Kiryl, and Borya in the NES version of Dragon Quest IV.

Kiryl and Borya, her retainers, give chase; they're resigned to not being able to make her stay put, but if she's going to leave, they can't allow her to travel alone. The three set out and soon come to a small village being terrorized by a local monster continually demanding young girls as a sacrifice. Alena immediately heads to the local church to offer herself as the next sacrifice, but she has no intention of dying; as soon as the demon shows its face, she, Kiryl, and Borya spring into action and take it out, saving the village.

After journeying straight to the far ends of Zamoksva, the nomadic Desert Bazaar, she learns her father is has become mute. Retrieving some birdsong nectar to treat him, he admits that he was mistaken in his over-protectiveness, and opens the Travel Gate to Endor. On arrival, Alena finds the local princess bemoaning her fate, because her father has promised her hand to the winner of the Tournament of Endor, an annual fighting competition, and her father is seriously regretting this promise. Though she hears rumblings of an extremely dangerous entrant named Psaro the Manslayer, Alena enters and gets to the finals, only to find that her opponent, who would have been Psaro, was a no show. By winning the tournament, Alena absolve the Princess of her duty.

However, even as she is celebrating her victory a Zamoksva soldier rushes in and cries that she must return to the castle at once, then dies at the scene. The party returns to the Castle but finds it completely devoid of life. They set out to investigate and the chapter ends abruptly.

Alena and her companions are not seen again until Chapter 5, when Kiryl has fallen under a dangerous fever and is bedridden at Mintos. Alena and a band of three mercenaries set out to the weed's reported location to try and recover some to cure Kiryl, but fails. However, the Hero of succeeds, and upon learning of their destiny the three immediately join the party for the remainder of the game. Some time later, they return to Zamoksva, finding the cause of its troubles to be the demon Baalzack, whom they kill in retribution and for the greater good.

Alena corresponds to the Martial Artist vocation. She has high strength, hit points, and agility; however her equipment selection is somewhat limited (compared to the Hero, Ragnar McRyan, and Torneko Taloon). She can wear most armor up to chain mail, but can wield only clubs, whips and her special weapon, claws. Due to her stat progression she has the highest luck of all party members, enabling her to frequently dodge debilitating spells.

Additionally, Alena's critical hit formula is very different from the other chosen; instead of a fixed 1/64 chance, her ratio is dependent on her level. In the NES and PS1 version, the formula is LvL/256, while in the Nintendo DS remake it is calculated as LvL(3/4)/256. Both will cap at level 64, giving probabilities up to 25% and 19% respectively. Interestingly, her formula was changed yet again for the iOS/Android versions with her cap being changed to level 89, restoring the 25% ratio.

Alena, along with the rest of the chosen, appear in Reaper's Peak if the player selects the near future option for the town's appearance. She is standing along with Kiryl next to the well that leads to Nokturnus' chamber, eager to face the tremendous power she senses from the room while the former attempts to dissuade her.

On July 30, 2010, Alena began appearing as a special guest at the Quester's Rest in Stornway. This could be downloaded through the DQVC using Nintendo's Wi-Fi channel when it was still available. When spoken to, she will give the Hero different pieces of her outfit is certain conditions are fulfilled.

A special Accolade is earned if the Hero wears all of the parts of Alena's costume.

Alena is seen exploring the imperial pantry once again, however this time the dungeon is a sweltering furnace that keeps her makeshift party from remaining mobile. Once the Flamethrower responsible is slain, Alena thanks The Luminary. She will also mention if she's seen the Prince of Cannock once that quest is under way.

Along with Ragnar McRyan, Kiryl, and Torneko Taloon, Alena appears as a playable character in Itadaki Street Special.

Alena is a playable character in the both games of the Heroes series. Gauntlets are her weapon of choice.