Zenithia is the name of the sky castle that appears in several games in the series. The first appearance is in Dragon Quest IV, and the castle is one of several elements from IV, V, and VI which connects the three games as a distant trilogy; this group was often called the Tenku (Japanese for Heaven, or Sky), or the Tenkuu no Shiro (Castle in the Sky) trilogy until Square Enix branded them as the Zenithia Trilogy in 2008.

Zenithia is home to a powerful dragon, guardian of the world, and the winged, angel-like Zenithian people. Zenithians are an insular culture who avoid contact with those on the ground, but there have been instances where they have fallen off the clouds by accident or descended to earth of their own volition.

The counterpart to Zenithia is Nadiria, the underworld from which demons crawl forth.

A sky castle at the end of Dragon Quest III's remake bonus dungeon is called Cloudsgate Citadel, and the resident monarch refers to himself as King Zenith. It is unclear whether this castle and Zenithia are one in the same, or merely a reference to later games in the series.

Zenithia made its first appearance as the final overworld location the Chosen travel to before descending into Nadiria. The castle can be accessed by climbing the Stairway to Zenithia near the Azimuth, which goes as far up to the sky. While at Zenithia, the hero is given additional experience points by the Zenith Dragon, enough to raise them one level. The Dragon also unlocks the Zenithian Sword's true powers, as it will be needed for the final confrontation. In the wake of Psaro the Manslayer's transformation in Nadiria, an energy beam is emitted and reaches the skies, burning a hole in the clouds. This hole gives the Hero access to the Doorway to Nadiria, directly below the castle.

In one of the castle chambers, a Zenithian woman can be interacted with. Her dialogue seems to imply that she is the Hero's long-lost mother. In addition, a diary can be found in the library reveals more information about the Hero's mother. In the adjacent rooms, the Hero can obtain a phial of Yggdrasil dew if he/she does not have any at the moment.

If the Hero interacts with Orifiela, she will allow her dragon companion, Sparkie, to accompany the Hero as a temporary party member. Sparkie acts on his own accord as do all guest characters, but focuses exclusively on attacking with his claws and breath.

Zenithia has fallen into a lake south of Lofty Peak years before the game's story begins. This happened when the Golden Orb, half of a set of magical orbs that power the castle, was knocked from it's pedestal by a cloud of miasma rising from Nadiria during the Zenith Dragon's tour of the world in the form of a human. The orb fell to earth and landed in Uptaten Towers, where it was discovered by the Hero as a child.

The Zenithians sent themselves into suspended animation to survive the flooding of their home during their leader's absence. The Hero and his companions will attempt to raise Zenithia on the behalf of Dr. Agon, a peculiar man that they had rescued from a several decade-long ride in a minecart in the Diggery Pokery. The man uses magic to observe what had happened to the castle, and sees the golden orb falling to earth, being rediscovered, and then destroyed by Bishop Ladja. He states that all is not lost, however, and sends the party to the Faerie Lea--the two orbs that power Zenithia were crafted by the fair folk and there is a chance that duplicates can be made. After a brief stint of time travel at the Faerie Palace, the Hero returns with the Golden Orb in hand and Zenithia rises from it's watery tomb.

With this partially restored power, the castle can move freely around the lower sky and is one of the methods of travel used by the Hero to traverse around the world map -- it's the only means of reaching the secluded Talon Tower.

Aside from the hidden passageway leading to the two orb pedestals, Zenithia's physical layout is largely unchanged from its previous appearance in Dragon Quest IV. The hole in the clouds is still present as well, although it no longer serves any purpose. In addition, the diary containing information about the previous Legendary Hero's mother is still present in the library, although its pages have aged to the point where only a small portion of the original passage can be read.

The story of the sixth game is the distant past of the Zenithia trilogy, revealing the origins of the flying castle and it's scaled sovereign. Here, it is know as Cloudsgate Citadel and is presided over by a man named King Zenith.

A former location in the Upper World, Cloudsgate Citadel was sealed away by the Dread Fiend Dhuran prior to the beginning of the game, and a giant hole is left behind in its place. Initially, the castle is corrupted by darkness and becomes a boss battle known as Stormsgate Citadel. The party will need to defeat the castle itself in battle in order to explore it.

Inside the castle, the Hero and his companions will need to engage Dhuran in battle to lift the darkness and restore the castle to its proper place. At this time, the castle is inhabited by normal people and is ruled by a human, King Zenith, although the egg containing the unborn Zenith Dragon is present. After Mortamor is defeated, the upper world begins to fade away; Cloudsgate Citadel remains as the only part of it that can still be seen and, floating above the real world, it becomes the Zenithia seen in the previous two games. At some point between Dragon Quest VI and V, the castle's inherent ability to float will fade away as well, making the two orbs necessary for the castle to remain in the skies.

There exists a set of legendary weapons and armor hailing from Zenithia, which are mandatory obtained in order to advance through the game. Most commonly known as the Zenithian sword, armor, shield and helmet; only a hero of Zenithian descent can wear them. The entire set is required to be allowed entry into the Stairway to Zenithia in Dragon Quest IV--if the hero is not present in the party, the gate will not open.

In VI, the items are not grouped together yet and have different names: the sword is called the Sword of Ramias, the armor is the Armour of Orgo, the shield is the Shield of Valora, and the helmet is the Helm of Sebath.

Square Enix has released the Zenithian Sword and Sword of Ramias as part of their Dragon Quest Legend Items series - miniature collectible toy replicas of artifacts from the Dragon Quest universe. 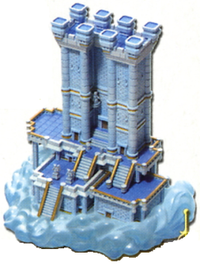