Robbin' 'Ood is a character and recurring monster in the Dragon Quest series that was introduced in Dragon Quest III: The Seeds of Salvation. He is most infamous for his mini-boss battles in III and appears three separate times throughout the game, committing heinous criminal acts in all but one of his appearances.

The character currently localized as Robbin' 'Ood has had a very bizarre experience with the English language since the merger of Enix and Square in 2004. Originally, Enix of America simply romanized his name as Kandar, and this remained consistent until the release of the first Joker game. In that title, the character was dubbed Robbin Hood and this name was kept through the localization of the DS version of Dragon Quest V.

The localization of the second Joker game created a problem by interpreting カンダタおやぶん (Boss Kandar) as a separate person altogether. The intent that this was an advanced, stronger version of the same character was either ignored by Square-Enix's localization staff or simply not understood, and as such was given the name Prince o' thieves. This has lead to confusion among fans, as the only palette swap of the common Hoodlum enemies to have anything to do with banditry has been Kandar/Robbin Ood throughout the entire series.

The situation became more convoluted with the localization of the cell phone port of the third game, in which the Robbin Hood name was shortened to a more cockney-accented Robbin' 'Ood. The reason for this is currently unknown.

Robbin' 'Ood's henchmen have also suffered inconsistent adaptations into English, with the Robbin huddle enemy that debuts in Dragon Quest III being split into two groups when no distinction existed in the original Japanese. An entirely new English name (Merry man) was assigned to these same goons for their return in Dragon Quest XI.

Robbin' 'Ood and his henchmen first appear in the Skyfell Tower west of Khoryv, having stolen the crown from the king of Romaria and leaving the place in chaos. This forces the king to recruit the Hero on a sidequest to retrieve the crown. However, performing the sidequest is optional, and failing to retrieve the crown does not prevent the hero from continuing the game.

Within the tower, Robbin' attempts to thwart the party by opening a trap door beneath the group's feet. Upon returning to the previous floor, the Hero finds the enemy has vanished. However, after leaping off the edge where Robbin' had been standing, the hero finds him several floors below. This results in the first genuine boss fight of the game (assuming the hero doesn't skip the side quest). After the battle, the hero acquires the king of Romaria's crown after Robbin' starts begging for his life.

The monster's second appearance is in the appropriately named Kidnapper's Cave, about northwest of Baharata. Robbin' 'Ood and his goons advance in their criminal careers by kidnapping Gopal Gupta & Tanaya, holding them for ransom. Upon freeing the young lovers, the Hero is confronted by the would-be kingpin himself, who challenges him to battle. After receiving a second defeat from the party, the crook pleads for mercy, claiming that he'll change his ways for real.

Robbin' 'Ood's final appearance is in the castle-town of Tantegel. He claims to have changed his evil ways and now acts as a typical NPC, now providing the Hero with information about the location of the Sunstone. 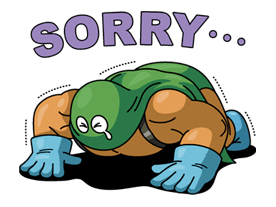 Robbin' 'Ood appears as the boss in the DLC Tablet Treasure Hunt in the Nintendo 3DS Version of Dragon Quest VII. Along with Hammer and the second version of Putric Stinkenheimer, Robbin' 'Ood cannot be tamed and thus only encounter in the tablet.

The Staff of resurrection is given as a reward for defeating him the first time.

Robbin' hood is supposed to be obtainable by collecting all the monsters and skill in the game. However, due to an oversight, the game includes Robbin' hood itself in this check, meaning the player would have to already have it in order to receive it. This makes it unobtainable through normal gameplay.