"I bet they were head over heels in love when they got married. And then she died before they had time to get sick of each other. It's the perfect love story."

Angelo (ククール, Kukūle) is a playable character in Dragon Quest VIII: Journey of the Cursed King. He is a complicated man who hides his somber past behind an ambivalent, suave mask of a gambler and playboy. Though seemingly indifferent to the plights of others and even coming off as condescending at times, Angelo is nevertheless a dependable companion and an asset to the party's efforts.

As a knight of the Templars, Angelo is a master of restorative and defensive magic, and has access to wind and instant death spells as well. His weapons of choice consist of swords (particularly rapiers), bows, and staves.

Angelo is an attractive young man with silver-white hair that frames his face and a long ponytail that reaches halfway down his back tied with a black ribbon. He has blue eyes and wears small gold hoop earrings on each ear. Although he is a member of the Templars, Angelo wears a unique red version of the uniform, which consists of a red long-sleeved tailcoat with white lining and brass buttons on the front and two long tails on the back worn over a black long-sleeved shirt, red trousers, and a red capelet with black lining that reaches down to his hips which he wears over his torso. He wears dark brown shoes covered by white spats with brass buttons on the outsides that reach up and cover his knees, as well dark brown leather gloves. He wears his templar's ring on his right hand. Angelo also wears a leather sword belt around his waist with a green scabbard on his right side where he holds his rapier. He is left-handed. 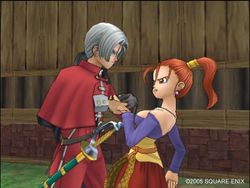 Angelo attempting to flirt with Jessica.

Angelo marches to the beat of his own drum, caring little of his religious and ceremonial roles at the abbey (although his swordsmanship and bow proficiency are impressive enough for him to become a Templar knight). He's more interested in hustling the rubes at nearby Simpleton and chasing ladies than in carrying out the duties of his station, and his party chat dialogue proves him to be very fussy at times, especially concerning his appearance.He is a playboy who constantly comments on the attractiveness of women he comes across on the journey. Angelo is something of a joker as well, and enjoys poking fun at people with serious attitudes at their own expense, such as his half-brother. Despite all this, when push comes to shove, he will go to extraordinary lengths to see things through; even outshining the rising star, Marcello, to save Abbot Francisco not long after meeting the party. The rest of the time, he wants to be carried around by his free spirit, as captured in one of his remarks prior to undertaking the Dragovian Trials:

"If there's one thing I hate in this life, it's a trial. What kind of masochistic lunatic would come all the way up here to endure a grueling, not to mention tedious, challenge?"

There are a few other characters worth remarking on. Marcello is Angelo's half brother, a character with a zealous hatred of the nobility. That, as the illegitimate son of one of his father's house servants, he was disowned by his aristocratic family imbues him with a desire to stick it to well-bred institutions--and their members--everywhere. He despises his half-brother, while he and Angelo are outwardly quite similar, the difference between the two is rather apparent.

After losing his parents at a young age, he was brought in by Francisco, the abbot of Maella Abbey, like many other orphans. He grew up to be one of the Templar Knights, responsible for the abbey's protection. He likes to gamble and drink, making him a disgrace in the other templars' eyes, but he has the favour of Abbot Francisco. His half-brother Marcello, head of the Templar Knights, considers Angelo to be the cause of his sorrows. Marcello orders him to join the party after the events at Maella Abbey.

Angelo learns a variety of spells and a decent amount of physical skills, though as a Priest he is naturally at his best when healing his companions. He can learn to use a sword but his strength is greatly outclassed by the Hero, making it an inadvisable path for him. It is a good idea to level up Angelo's staff skill to increase his MP and spell repertoire in addition to unlocking additional spells. His Charisma skills are excellent for countering tension-happy foes as well as inflicting status ailments, and Pearly Gates is a fantastic crowd control ability during the end-game. Angelo's efficiency shines most when using a bow however, as the Cherub's Arrow and Seraph's Arrow skills will allow Angelo to easily recharge his MP while dealing damage and the Multishot and Shining Shot skills allow him to perform crowd control on groups resistant to wind damage.

Angelo appears as one of the guests at Erinn's Inn at Stornway. This was only achievable through the DQVC using Nintendo's Wi-Fi Channel when it was still available. He will give the player various items when certain conditions are filled, such as talking to him on your birthday, talking to him as a Priest, and once Quester's Rest has been fully upgraded.

The player will earn the accolade Tasty Templar for equipping all of the pieces of Angelo's equipment.

Angelo is one of the represenatives of the Dragon Quest series and is playable by default in the game.

Angelo appears as one of the new playable characters in the game, joining the party alongside Jessica at Mt. Neverest. His Coup de Grâce is Pearly Gates and bows are his weapon of choice, replacing Bianca as the party's main archer. He is a long-range support character, using various bow techniques such as Shining Shot and Rain of Pain, and bolstering the party's strength with Oomph and the Timbrel of Tension.

Angelo debuted as one of the game's starting leader characters, representing the Priest vocation. Once again, bows are his weapon of choice.

Angelo appears as a S-rank member of the Hero family during the second part of the limited Dragon Quest VIII event on his own banner alongside Tentacular.