"I am the Dragonlord, master of masters, king of kings! Long have I awaited this moment. Come! Take thy rightful place at my side! Do so, and I will grant unto thee dominion over half the world!"

The Dragonlord is the main antagonist and final boss of the original Dragon Quest. Before the game starts, he steals the Sphere of Light from Tantegel Castle to unleash his forces of darkness upon Alefgard; he then kidnaps Princess Gwaelin to hold her hostage and prevent her father from challenging his new tyranny.

At the end of Dragon Quest, the Hero defeated the Dragonlord and restored peace to Alefgard.

Being the first villain of the series, the Dragonlord displays several traits that would define the archetypal arch-fiend; he is a vain, power-hungry despot who will stop at nothing to get what he wants, whether it be imprisoning a maiden deep beneath the earth or wiping an opposing town off the map just to make a point.

Though brutal and mindlessly savage at first glace, these actions are actually well planned tactics meant to secure the scaley lord's political power in Alefgard. As mentioned above the kidnapping of the princess is meant to keep the king and citizens from so much as daring to think about standing up to him, and the obliteration of the kingdom's highest commerce center meant that trade with outer lands would be crippled. Indeed, the very fact that the Dragonlord's first move in his plan was to steal the Sphere of Light shows that the would-be despot plans his actions very carefully.

When confronted by the Hero, the Dragonlord offers him the chance to split the world and rule half of it as his ally. This was an unprecedented move for a video game villain in 1986, when most antagonists had either no personality to speak of or theirs was confined to the pages of a manual. By offering to make a deal when cornered by the Hero, the Dragonlord proves that his aspirations are truly political in nature, and not blindly dedicated to chaos for chaos' sake. Indeed, Builders expands on this, indicating that he's more of a radical activist for monsters and treats them very well, being seen as a king of kings by them. Additionally he has no desire to exterminate humanity, but rather wishes for monsters to rule over them the way (in his view) humans have ruled over monsters.

In battle, the Dragonlord appears as a humanoid sorcerer who possesses the skill of magic but is fairly weak, physically speaking. After receiving enough damage, the Dragonlord transforms into a more powerful, dragon form (his "true" form). The music also changes to the final battle theme.

In Dragon Quest II, a more friendly descendant of the Dragonlord resides in the ruins of his Castle. The child is very proud of his grandfather's attempt at world domination, and is very annoyed at Hargon's own attempts, seeing the effort as an upstaging of his family's legacy. He aid's the party by giving vital information regarding the 5 Sigils.

When spoken to, the Dragonlord will present the Hero with an opportunity to rule half of Alefgard with him. Answering 'no' results in the start of the battle with the Dragonlord. Answering 'yes' varies between the different versions. In the originals, the Dragonlord will give control of the World of Darkness to the Hero, the screen fades to black, and the menus become red, as if the Hero had been fainted/killed in battle. He will also state he will revive the hero if he falls in battle, even giving him a password in the Japanese Version. Gameplay will stop at this point. In the remakes, accepting the offer simply causes the hero to faint, and reappear outside Tantegel Castle.

The grandson of the Dragonlord resides in the same location in Dragon Quest II. He is a character of core importance as he informs the heroes of their need to collect the Crests and contact Rubiss.

Although not specifically mentioned, the Dragonlord inherits Zoma's Citadel sometime after Zoma was defeated by the hero at the end of Dragon Quest III. Also, according to the Emblem of Roto manga, the Dragon Queen's egg is most likely Dragonlord.

The Dragonlord appears as a Legacy Boss in Dragon Quest IX. His map can only be obtained as a rare drop from Greygnarl in grottoes. Unlike most other legacy bosses, he does not use magic, relying on breath attacks and physical strikes, and is Enraged by anyone that inflicts a critical hit or haywire spell on him. Note that the Dragonlord is classified under the ??? family, which means Dragon Slash and related effects do not apply to him.

You should have one or two healers and two main damage dealers. A character with 100 skill points in fource and another with the minstrel's manual is important. Double up is also viable. At the start of the battle apply gale fource and your damage buff. Have your main healer cast multiheal after every breath attack and a Sage with Kazing is to revive any party member who gets hit with a critical attack. Your main damage dealer should use a multi hit attack such as Multifists or Falcon Slash with a falcon blade. If the boss casts Disruptive Wave, apply your buffs again and keep hitting him until he goes down.

The Dragonlord (DracoLord at the time) acts as the boss of the Gate of Ambition and will attempt to draw Terry over to his side in the same way he attempts to bargain with the Hero in the original Dragon Quest. but even if you replied yes, he would laugh and still challenge you.

Both forms, known as Dracolord for his humanoid form and Dragonlord for his dragon form, appear in the game as usable monsters. 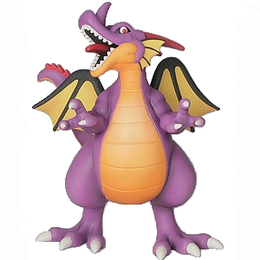 The Dragonlord in his second form. This Dragonlord is from the Sofubi Monster merchandise series.

Both forms, humanoid and dragon, appear in the game as usable monsters.

The nature of Builders is a what-if story in which the Hero fell for the Dragonlord's ruse and took his offer for half the world. Warping the hero's mind into that of a bumbling barbarian, none stood in the Dragonlord's way as he cast the entire archipelago of Alefguard into darkness. Furthermore, the scaled sovereign placed a curse upon the population that blocked all memory of building from their minds--while a person may recognize the individual materials used to construct something, the moment they move to craft the curse activates and seals the person's memory of how the materials are used, effectively sending the population to the stone age and forcing them into an arduous existence living off the bare expanse of the despoiled land.

From his perverse perspective, the Dragonlord considered this to be an act of mercy--he states that through building humans rebel against their fates and in turn only bring upon more miserable ones to their lives. He explains that he had no choice but to muddle minds, for if he did not the world would be thrown out of balance and fall into ruin. As the Builder is the last remaining vestige of the spark of creativity, they must be snuffed out under his heel.

The Dragonlord is unimpressed with the Builder, stating they are nothing more than but a mere puppet of Rubiss. Privy to the Goddess' forsaking of the Builder near the end of Chapter four, he attempts to use this schism and uncertainty to cloud the child's mind when he is bested in his humanoid form. Offering half the world, the Dragonlord states that the Builder's role in Rubiss's scheme has ended and they should now allow themselves to be a slave to one that has already abandoned them. Whispering with a forked-tongue, he sweetens the deal by promising the land the Builder will inherit will not be one of ashen darkness that Alefguard has become, but one of light where they may build their own kingdom as they see fit. If the Builder refuses the offer, the Dragonlord points out that if they fail to defeat him then all the towns, villages, and friends they have made will be rent asunder.

The Dragonlord is mentioned in passing by a crew member of Captain Whitebones' ship but otherwise he does not make any appearance. However, the player can unlock his throne if they have a save of Dragon Quest Builders on the same system, allowing them to temporary take his appearance whenever they sit on the throne.

The Dragonlord and his True Form appear as S-rank members of the ??? family during the Dragon Quest I event. Both can be faced as bosses in the story quests. His humanoid form can learn Frizzle, Kafrizz, and Hellfire Blast naturally and his Leader Perk raises the potency of Frizz-type spells for the team by 20%. He can also participate in the Battle Road as a party member. His True Form can learn Jet Black Claws, Fire, and Dragon Swing naturally and his Leader Perk lowers the enemy's defence by 20%.

The Dragonlord, in his human form, is a playable character in Itadaki Street Special.

While the Dragonlord himself doesn't appear in the game, he is referenced in the Hero's Classic Mode path on the seventh and final stage. He is initially represented by Robin (from Fire Emblem: Awakening) in his blue outfit fought on Dracula's Castle (from Castlevania) in its Ω form. After Robin is defeated, a giant purple Charizard takes his place for the remainder of the fight. This two phase battle references the Dragonlord's two forms as a sorcerer and a dragon in the original Dragon Quest.

The Dragonlord appeared as an antagonist to The N Team in Captain N: The Game Master, and worked with Mother Brain in his first appearance. In the show, he is a giant red dragon and lacks a human form.