Ramia is a legendary phoenix that plays a prominent role in Dragon Quest III: The Seeds of Salvation. She is also first appeared as an obtainable monster in Dragon Quest Monsters 2. In each appearance, she is depicted as a gigantic bird-like being of godly majesty and grace, resembling a white peacock. 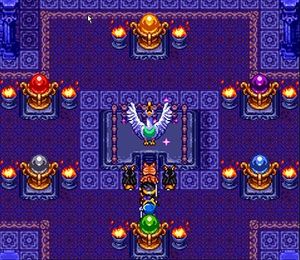 When the party first discovers the Leiamland shrine, Ramia is only an egg being guarded by a pair of twin sisters. In order to hatch her egg, the hero and his/her party must gather the Six Orbs from around the world and place them on pedestals surrounding it. Once hatched, Ramia serves as the series' first aerial transportation, allowing access to such places as Baramos' castle and the Dragon Queen's castle in the central continent. However, Ramia cannot travel to the World of Darkness, nor can she land where the player cannot walk, such as high mountains and bodies of water.

The theme that plays while riding Ramia is Heavenly Flight.

Speaking to her attendants after her hatching reveals that Ramia is a servant of the Goddess and will only allow those pure of heart to ride upon her, cementing the Hero's destiny as a savior. The twins further state that Ramia has incarnated many times in the past, aiding heroes in times of crisis.

Ramia is the true name of Empyrea, which the bird reveals to the protagonists as she departs their world after the death of Rhapthorne. She explains that Empyrea is the name that the seven sages of legend gave her after the sealing of Rhapthorne centuries ago, and that she kept the name in their world out of respect for their bravery. 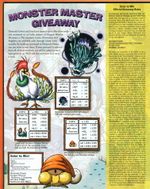 Ramia is not normally available in the game, being given away as part of a Nintendo Power contest during the game's debut year. Since this contest has ended, cheating devices and ROM hacks are the only way to gain access to the phoenix.

Ramia appears alongside her Empyrea design, and both can be in the same party. She is a rank SS, size-three monster, and was available in 2012 via a limited distribution through McDonalds fast food restaurants in Japan along with Captain Crow. One year later, the monsters were made available in-game through an official update patch.

Mothra herself is mentioned by Yūji Horii as a part of his trivia quiz in the developer's room ending of Chrono Trigger.