(Redirected from Mirror of Ra)

The Ra's Mirror, formerly localized as the Mirror of Ra or Lar's Mirror, is a recurring item in the Dragon Quest series. It is typically used to reveal a character's true form and advances the story.

In the remake of Dragon Quest V, a book in Heaven's Above Abbey called 'The Maiden of Abovitall Tower' reads, "There was once a girl who climbed a tower where the Goddess was said to live, because she wanted to find out if the Goddess really existed. The Goddess put many obstacles in the young girl's path, but she courageously persevered until she reached the top of the tower. There, legend has it that the Goddess rewarded her by bestowing on her a mysterious mirror with the power to reflect the truth".
This is obviously referring to Ra's Mirror. The girl must have brought it back to Abovitall Tower for some reason because later in the game, the Hero goes to Abovitall Tower and goes through probably the same annoying puzzles she did to get it. 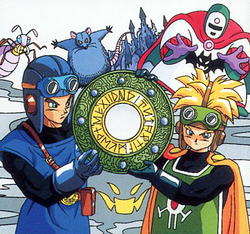 The mirror is used to reveal the true form of the Princess of Moonbrooke. At the beginning of the game, she is transformed into a dog by a curse from Hargon. Using the mirror in front of the dog in Hamlin breaks the curse on her and she then joins the party. The mirror itself cracks afterwards and is no longer in the inventory.

The mirror can found in the Manoza Cave. Using the mirror at night on the sleeping king of Manoza reveals him to be a Boss Troll. By defeating him, the hero's party receives the Mod Rod.

The mirror is simply randomly dropped by Float-o-copiers and has no relevance to the plot as with the previous two games. Indeed, players can finish the game without ever obtaining it, let alone using it. In this game, it can be used to return float-o-copiers to their true forms after they Morph into a party member, though this is not required to defeat them (especially as the Zenithian sword can also undo Morph).

It is also buyable at the Pioneer Town's final form's casino for 10,000 tokens (Endor casino for only 2,500 tokens in the NES Version).

The mirror is found in Abovitall Tower to the south of the aboreas teleportal, which is itself south of Heaven's Above Abbey. The mirror is used to reveal the true form of the Faux dowager. Later, it can be used to force Admirers to revert back to their normal forms.

The mirror is found in the Moonmirror Tower in the the Real World. It is used against Murdaw in the Upper World, and to reveal the nature of the curse cast upon the mirror princess in the basement of Castle Swanstone.

The mirror can be found in the Cathedral of Blight near the end of the game. It is used in battle to change back creatures who use transform to turn into party members.

The mirror can be found in Chapter 3(MoonBrooke), It can use to reveal the true form of the monsters, in a part of the chapter you give the mirror to Annesa, She doesn't give it to you until they get to the Isle of Awakening, The mirror can use in Furrowfield you can use to the dog and it transform into a Princess