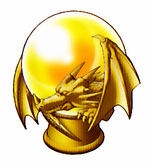 The Yellow Orb is a key item in Dragon Quest III. It is one of the Six Orbs required to hatch Ramia. It is said to be traded between many people all over the world, but ultimately ends up in the possession of the Dealer character who was left to found the Immigrant Town.

Once the immigrant town reaches its final growth stage, the Dealer will be put into jail. Visiting the Dealer in jail, he reveals to the heroes the location of the yellow orb within his house.

The Yellow Orb is an important item that must be found at Golding's estate in Baccarat before the final battle with Rhapthorne.

The yellow orb reappears in Dragon Quest IX as a very exotic alchemy ingredient, used for some of the highest alchemy recipes. It is a rare drop from Murdaw, Mortamor, and (at certain level ranges) Nokturnus legacy bosses.